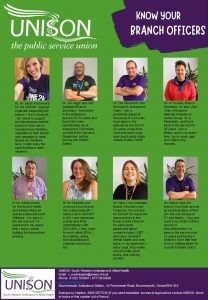 UNISON South Western Ambulance and Allied Health Branch has over 3,000 members. The Branch is made up of all of its members. Some members are elected by the membership to play different roles such stewards and branch officers. Here are some of the key members of our branch team:

Jo is the main point of contact person with the employers and the wider union. She ensures that all matters of Branch administration run smoothly.

Charlotte is the glue that holds the Branch team together. She runs the Branch Office out of Bournemouth Ambulance Station, coordinates diaries handles administration and acts as first point of contact for any enquiries coming in to the Branch Office.

Assists the Branch Secretary in coordinating the Branch Team, negotiating with employers and representing members in the most serious or complicated cases.
Clare based at HQ in Exeter.

Assists the Branch Secretary in coordinating the Branch Team, negotiating with employers and representing members in the most serious or complicated cases.

Maggie Barnden
Maggie.Barnden@swast.nhs.uk
Maggie is a Steward in East Cornwall.

Marcus Becker
Marcus.Becker@swast.nhs.uk
Marcus is a Steward and Health and Safety Representative in Cornwall.

Shane takes information from the Branch Team and turns them into circulars and notices for members. He is one of the branch team who run the social media accounts for the branch, including Facebook and Twitter. Shane is specially trained to produce press releases, make media appearances and support other members who are making statements to the press.

There are no upcoming events at this time.